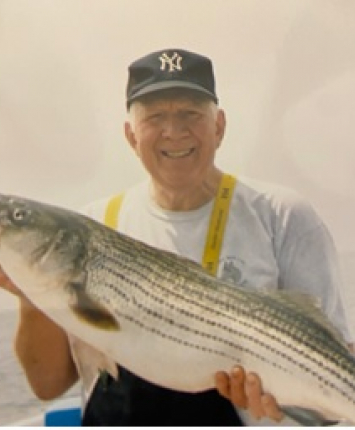 Arthur, more commonly known as Artie or Big Art, was born in NYC on November 26, 1939 to his parents Isabella and Arthur.  He grew up in the Bronx, which no doubt led to his lifelong love of the NY Yankees, with his favorite players being Mickey Mantle and Whitey Ford. Big Art would tell stories of the many Yankees games he attended over the years including Don Larson’s perfect game in the 1956 World Series, and how as a kid he would work in order to raise enough money for subway fare, bleacher seats and a hot dog at the Big Ballpark in the Bronx. He was avid sports fan, not just loving the Yankees but also the NY Giants and NY Rangers.

Big Art entered the U.S. Navy in 1957 telling tales of his time on the USS Dealey and deployments to the Mediterranean and South Atlantic. He was honorably discharged in 1960 and was incredibly proud of his U.S. Navy service for the remainder of his life.

Big Art lived most of his life in Queens, was an avid fisherman and skier for many years and loved spending time with friends. He bartended for almost 50 years, enjoying the pour of cold beers and whiskey on the rocks for his many friends, continuing to do so right up until his death.

Arthur was predeceased by his mother, father, and his many friends.

In lieu of flowers, please consider a donation in memory of Arthur J. Mueller to the Wounded Warriors Project.