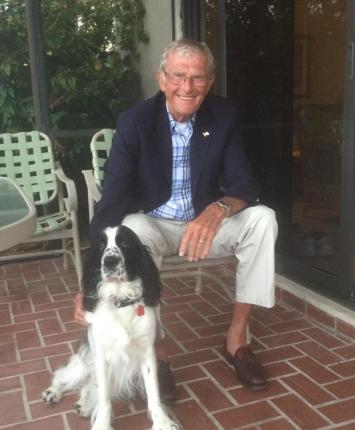 Frank passed away peacefully at the age of 92.  He was born at Nassau Hospital to Helen T. Harder and F. Kenneth Harder.  He graduated from Hempstead High School and went on to be an All-American track and field athlete at Purdue University, West Lafayette, IN, where he was a member of the Alpha Tau Omega fraternity and the prestigious Gimlet organization.  Frank enlisted in the US Army, serving as a 2nd Lieutenant in a medical battalion attached to the 3rd Infantry Division in Korea, being awarded a Bronze Star.  After his honorable discharge, Frank joined his father in business and helped to grow Harder Services, Inc., now in it’s 99th year.  In 1989, Frank served as president of the National Arborist Association, the predecessor to today’s Tree Care Industry Association.

Frank enjoyed his later years spending time in his garden with his wife and his beloved Springer Spaniels, reading as many books at one time as humanly possible, visiting with his family, spending time in Florida with sisters-in-law and enjoying his many friends.

Franks greatest legacy is his family.  He is survived by his beloved wife of 70 years, Kristine, their 5 Children: Laura, Hank, Peggy, Bill and Linann, and their families, which includes 12 grandchildren and 10 great-grandchildren, who will all miss their father and “Pop-Pop” dearly.

In lieu of flowers, please make a donation to: the Wounded Warrior Project or the Juvenile Diabetes Research Foundation.

A Celebration of Frank’s life will be held at Fairchild Sons Funeral Home in Garden City, on Thursday April 22nd from 4 pm to 8 pm.  A family service will be held at the Garden City Community Church on Friday morning April 23rd at 9:30 am, with his interment at Calverton National Cemetery immediately following.