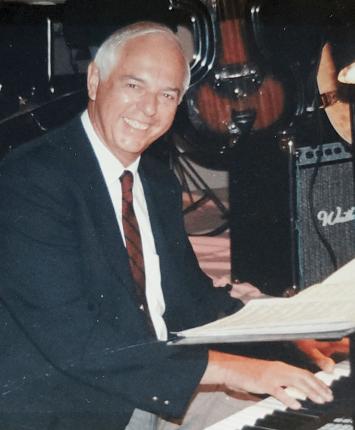 George was born in Paris in 1928 to the Rev. Basil and Mrs. Helen Efthimiou. His family moved to New York three years later, and then to Boston until 1942, when they returned to New York. George graduated from Polytechnic Institute of Brooklyn at 19 and earned his M.B.A. from the Harvard Business School in 1952. He then served in the U.S. Air Force for two years before beginning a career in maritime heavy equipment sales, eventually owning and operating GMG Systems, Inc., later alongside his son Tom.

George met Carol at a Garden City Hotel cotillion during the fall of 1958 and they wed at St. Paul’s Greek Orthodox Cathedral on June 28, 1959.

For the last 44 years, George has been the pianist in Garden City’s Village Music Makers swing orchestra. In recent years, he also performed impromptu piano concerts at the Garden City Library for fellow senior citizens before the weekly movie matinee. He was an avid squash player at and Lifetime Member of the New York Athletic Club, which he joined in 1954, and Cherry Valley Club member and tennis player.

Known for his sweet disposition, good humor and easygoing, kind manner, George was a friend to all and treasured patriarch of his family. A private family funeral was held Jan. 13. In lieu of flowers, the family welcomes donations to StJude.org in George’s memory.