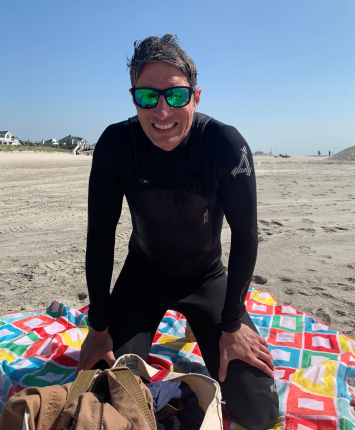 Born in the early spring of 1981 and called by God on July 27, 2022. Vicktor was a loving husband to Alexis, a nurturing father to his 7-year-old daughter Allie and 4-year-old son Nathaniel, and the very best son any father or mother could pray for and enjoy. Good friend to many, mentor to those younger than himself, respectful to all around him, Vicktor carried a strong faith in God, believed that each generation should and would do better, he held close Romans 12:2 (1611 KJV), and Family, God and Country. He was a man that never wasted an opportunity, lived without vice, stood tall and walked his own road with eyes, mind, and iron will fixed to obtain the correct end result.

Vicktor started his schooling in the Montessori School two years before he was old enough to enter the public grade school. His 1st grade through junior high school schooling were through the public school system. For high school, Vicktor tested for and was admitted to Chaminade. The rigors of Chaminade's teaching, combined with the Marianist teachings of "no nonsense is permissible", gave Vicktor a good education and his foundation for life. Upon graduating high school in 1999, Vicktor was selected to attend the Wharton School of the University of Pennsylvania where he graduated in 2003 with a Bachelor of Science in Economics, concentrating in Real Estate and Finance.

Vicktor was shown work ethic at a young age. He started at age 12 with summers at the family business sweeping floors and driving forklifts. By age 14, Vicktor had learned warehouse management, and during his after-school time in the Chaminade years, Vicktor was taught bookkeeping, counter sales, real estate management / maintenance, and the basic lessons of how business should be conducted: treat every person as you would want to be treated, always be honest, and always be fair.

The family small business basics were the foundation of his entry into the "big' business. After his college graduation, Vicktor was hired by Wells Fargo and lived in Boston for a year. He was then headhunted by Credit Suisse First Boston to be in their real estate private equity group in New York City. During his four years at Credit Suisse, Vicktor was transferred to their London office where he found, purchased, developed, and sold large real estate all over Europe. The sudden death of his sister brought him back to New York, and then the implode of big business brought Vicktor back to the family business. He was able to apply his people skills and energy to get a good hold on the family real estate management, help make the storefront business larger, and he applied his computer skills to bring the family business onto the then “new” world wide web.

All work and no play make for a dull life. Vicktor was in the Boy Scouts of America from Tiger Cub to Boy Scout with earned merit badges; the program shaped his early years. He played little league baseball from t-ball through his start of junior high school when he decided to switch to lacrosse. Vicktor spent his summers from ages 6 through 10 years at a sleepaway nature camp, Peconic Dunes. Passing the Coast Guard boating course at age 14, Vicktor enjoyed the family boat, learned the patience of fishing, and how to navigate by the stars.

He had his first business foray by riding his bike to Huntington Village, buying bagels, newspapers, coffee and such, and then taking the boat into Lloyd Harbor and peddling the items to the weekend boaters anchored in the bay.

Vicktor was on the Chaminade rowing and rifle teams. Trained in the safe-handling of firearms from a young age, Vicktor enjoyed the sport of target shooting at the National Match level. He was tutored by the USMC Marksmanship Training unit at Camp Lejeune during his Chaminade and UPENN summers. His shooting skills and mental discipline gave him the ability to go forward as the captain of the NYS Junior High Power team, earn the Distinguished Rifle Badge, win the Presidents 100 badge, Whistler Boy trophy, and be ranked as one of the top shooters in the country.

Vicktor also enjoyed the white-water curl of the Atlantic beaches and surfed unto the time his strength left him, even up until December 2021 at the Skudin indoor wave pool.

Vicktor competed in motor sports for 8 years, owning and driving a Spec Miata. With lifelong friend Noah as mechanic and wife Alexis with camera in hand, the east coast racetracks of Lime Rock Park, NJ Motor Sports, and Watkins Glen International became a playground. Vicktor logged many hundreds of hours in competition and drove in the top percent of his race class. His ability to drive at night and in the adverse conditions of rain got him a spot on a three-man sponsored team to drive in 24-hour endurance races.

In August 2020, despite his intense chemo treatment, Vicktor checked a big thing off his bucket list: he and friend Brett took a cross-country road trip from New York City to Redondo Beach, California, in 34 hours, 35 minutes. This went on record as the second-fastest “Cannonball Run” ever on stock fuel tanks.

There is a time for all things under Heaven, the time had come to marry Alexis, buy the home with the picket fence, start a family, and live the American dream of making things better for the next generation.

Vicktor was told he had a rare and aggressive cancer the same year his son was born.

As in all things in his life, Vicktor took the battle head on. With good fortune, Vicktor had the guidance and support of many family friends. Vicktor never felt sorry for himself and never stopped trying to learn and find any area of medicine that might help. No travel was too far. Sloan Kettering was his home base, but he also consulted Dana Farber, UPenn, John Hopkins, Univ. of Chicago, the Mayo Clinic, and he gave it one last try at the NIH in Bethesda, Maryland. Vicktor compiled books of notes that were sent around the country and Europe for further review. He treated fighting the disease like a business, but despite his unstoppable efforts and positive attitude, the disease overcame his body.

Vicktor lost the final battle surrounded, hand-touched, and prayed over by his loving wife Alexis, his father Ron, Julie, and two hospice RN's after 10-days of in-home care.

Rather than a remorse of death, in some months’ time we will be doing a celebration of life party. We ask that you please help Vicktor's children know the man he was by taking the time in the coming months to write to the family or on this website about your interaction with Vicktor. We want to provide an actual book that will contain letters from those who knew their father well, how he touched your life through provision of help, your interaction as a person to person, fun and good times. The children need to have a goal and will be encouraged by you to follow Vicktor's outlook and footsteps.