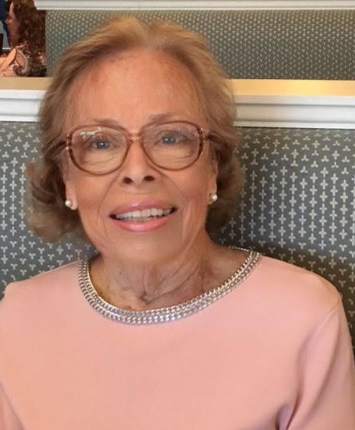 In lieu of flowers, please send donations to : The McCallen Society of St John’s University.

Patricia (Pat) Moane Dwyer died peacefully on July 30, 2021 at  The Amsterdam at Harborside, Port Washington, New York at the age of 91. Pat is survived by her sons Kevin (Sue), Richard (Teri), Joseph, and Michael (Tim Sullivan), seven grandchildren and twelve great-grandchildren. She is preceded in death by her husband (Joseph), parents (Richard and Julia Moane), and her siblings (Virginia Moane, Marie Moane McCarrick (Edward) and Richard Moane Jr).

Born on May 9, 1930, in Brooklyn, Patricia graduated from Our Lady of Mercy Academy High School (Syosset), and received her BA and MS in Education from St John’s University. Pat pursued her doctoral studies at Long Island University.  Pat and Joe moved to Syosset in 1955, and they were founding members of St Edward’s Parish, St Edward’s School, and the St Edward’s Parish Council.

A retired middle school teacher (Jericho School District) as well as an adjunct lecturer on the graduate level, Pat was an avid bridge player, world traveler and a member of several boards including professional, business and social organizations.  In addition to living in Syosset and Garden City before moving to The Amsterdam in 2014, Pat and Joe were also long-time residents of Ocean Harbour, Hutchinson Island, Florida, where she served on the Board of Directors for several years.  Pat served as a Eucharistic Minister at St Jospeh’s (Garden City) and St Peter of Alcantara (Port Washington) Catholic parishes, and was also a parishioner of Holy Cross Catholic Church, Vero Beach, Florida for 40 years.

A funeral is scheduled for 10:00 AM on Monday August 16, 2021, at St Joseph’s in Garden City; private interment at a later date. The family would like to thank the caregivers at The Amsterdam at Harborside and the staff of St. Francis Hospital, Roslyn NY for their care and dedication.