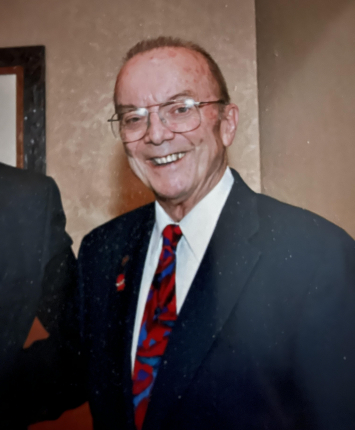 John F. (“Jack”) McGowan, 86, passed away surrounded by his loving family at Good Shepherd Hospice on October 15, 2022, after an illness.

Born in Brooklyn on January 16, 1936 to Dr. Andrew and Marjorie McGowan, Jack grew up in Ozone Park, NY, became a dedicated Lynvet, and attended John Adams H.S. and Fordham University before becoming a teacher and union leader in the East Meadow Public Schools, where he met his wife, Charlene, whom he married in 1964.  They moved to Garden City in 1968, and Jack pursued a career in school administration, obtaining his Ed.D. from New York University in 1971, the same year his daughter, Carter Anne, was born.  He went on to work proudly for Eastern Suffolk BOCES, retiring in 1993 as Deputy Superintendent after a thirty-year career devoted to providing students across central and eastern Suffolk County access to special, technical, and occupational education.

A dedicated man of faith, Jack was active in his parish, St. Anne’s, as a school board member, Extraordinary Minister, and lector. He was ordained a Permanent Deacon in the Diocese of Rockville Centre in 1989 and over the next twenty-eight years assisted as Mass weekly and performed countless baptisms, weddings, and wake services, serving as a deacon at St. Anne’s, Notre Dame, Our Lady of Mercy, and St. Vincent de Paul.  He also volunteered with Good Shepherd Hospice for many years and served as St. Anne’s representative to the Garden City Ecumenical Council in the 1990s.

Jack became involved in Garden City village governance in 1975, serving on the village school board.  He later became President of the Western Property Owners Association, a village trustee and served as Mayor from 1989-1991.  He also served as President of the Nassau County Village Officials Association and later that organization’s Executive Director.

Somehow, he even found time to officiate high school football and lacrosse throughout New York City and Long Island, coach village soccer and softball teams when his daughter was young, teach CCD, and root for the Islanders, Mets, and UConn Women Huskies basketball team.

He is survived by his beloved wife, Charlene, and his devoted daughter, Carter Anne.  His much-loved siblings, Dr. Andrew J. McGowan, Jr.; Robert E. McGowan, and Peggy Clarke preceded him in death and he is now reunited with them and sharing in the vision of God.