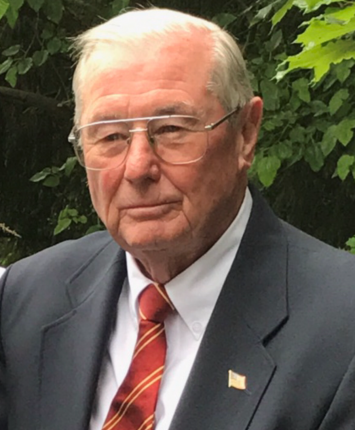 Dr. Paul Joseph Corwin, born March 19th, 1932, son of Dr. Louis A. Corwin and Margaret Mahoney, passed away peacefully on May 11th, 2021, surrounded by his children. Paul was predeceased by his wife Joan Costello, the love of his life. They met at the Atlantic Beach Club and married in 1963. They enjoyed many beach summers with their children making lifelong friends. Paul is survived by his five children: John Paul, Corinne Shafran (Joshua), Candice Dunne (Charles), Colette and Cornelius, and his four grandchildren: Connor Dunne, Hailey Shafran, Shay Shafran and Corwin Dunne. Paul is also survived by his brother James Corwin (Barbara) and predeceased by his brother Lou Corwin, Jr. (Shirley). He was a longtime resident of Garden City and East Atlantic Beach.  He attended Our Lady Queen of Martyr elementary school followed by Chaminade High School Class of 1951.  Paul was not only a scholar but an accomplished athlete playing football and baseball. He was honored to receive the “Chaminade Man of the Year”  award which was given to a student who embodied the Chaminade principles of a well-rounded and faithful Catholic young man.  After graduating Chaminade, Paul attended Dayton University, followed by Cornell University School of Veterinary Medicine.  Paul graduated from Cornell University in 1957 where he was admired by many classmates, as Paul’s father was a pioneer and leader in small animal medicine.  After graduating Cornell University, he began his veterinary career alongside his father at the Corwin Animal Hospital in Richmond Hill, New York.  He also worked for the New York State Racing and Wagering Board as the Supervising Veterinarian, dividing his time among Aqueduct, Belmont, Saratoga and Yonkers Raceways.  Paul also served as a First Lieutenant in the United States Air Force. He was a lifelong New York Giants fan and season ticket holder for over 50 years. He enjoyed the simple pleasures in life; spending time at his home on the beach with his family and friends and riding his bicycle daily.  He also spent his free time playing golf and tennis at the Hempstead Golf and Country club.  A mass will be celebrated on May 20th, 2021 at 10am at St. Joseph’s Catholic Church, Franklin Avenue, Garden City, followed by interment at Holy Rood Cemetery.  In Lieu of flowers memorial contributions may be made to Cornell University, School of Veterinary Medicine (Dr. Paul Corwin).  Paul Corwin also known as Doc was a kind and patient man who will be greatly missed by all.  Forever in our hearts, we love you Dad!