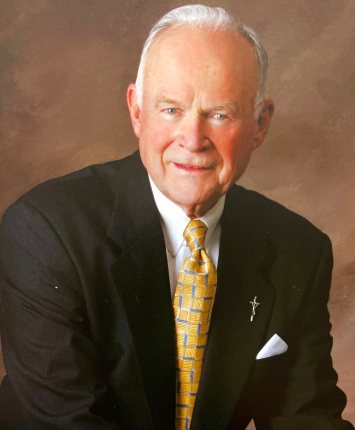 In lieu of flowers, please send donations to National Shrine of The Divine Mercy in Stockbridge, MA.

We celebrate and honor the life of James Vincent O’Connor, born January 28, 1928 in Brooklyn, New York. His beloved sweetheart and wife, Ada Mae, have treasured their 65 years of marriage in a most complete and blessed way. Their eight children, Mary, James, Annmarie, Joseph, William, Daniel, Maureen, and Jennifer, comprise the manifestation of the love that Jim and Ada bestowed into the world and unto their Creator. This has blossomed further with the births of each of their 28 grandchildren.

James attended Erasmus Hall High School in Flatbush, and joined his twin brother in joining the Marine Corps on the day following their high school graduation. James was sent to China as part of the Marine Corps deployment there after the close of the WWII. He later became an original member of the highly distinguished Marine Corps Silent Drill Platoon at Marine Barracks, Washington, D.C. There has never been a prouder Marine and faithful to the end. Semper Fi!!!

He was able to gain higher education when he completed his degree at Manhattan College on the G.I. Bill. He met sweetheart Ada Mae while working together at The Equitable. Their attraction to each was immediate, and their shared commitment to Catholic faith became a lifelong center to a glorious love affair. Big Jim later gained his MBA at St. John’s University in the 1960’s with Ada meticulously editing and typing his thesis on a Smith Corona typewriter.

A successful career in the fragrance/flavor industry as a top-tier salesman spanned several decades. Ada and Jim not only raised their 8 children together, but became pillars both of the community and of parish life. Jim was perhaps the most beloved coach in the history of Bayside Little League, favoring an attitude of teaching and encouragement, but always flavored with his Marine Corps fervor. He ran the St. Vincent de Paul Society, lectored, was a Eucharistic Minister, and co-founded (with Ada of course!) The Divine Mercy Chapter of Sacred Heart Church in Bayside, Queens.

James lived “in the moment” in a way most only aspire to. He passionately loved literature, Broadway musicals, letter writing, gardening, big band music, dancing, sports, and throwing parties in the Bayside house and backyard. His eight children will speak of “entering Camelot” each time they would return to their childhood home. Both our Bayside home and Garden City apartment will always be the collective center of our Universe thanks to the best parents the world can ever know.

We love our husband, Dad, Poppie and friend to no end. He is our new Heavenly mentor now… our deepest and most profound prayer of Thanksgiving to God for the gift of James Vincent O'Connor in our lives.