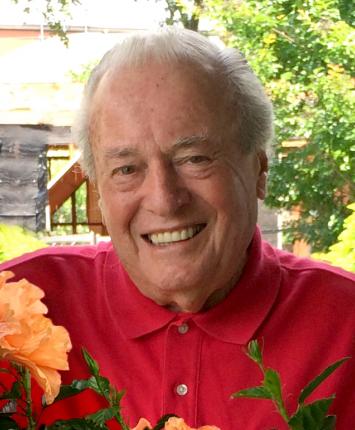 Tom was the son of Thomas and Kathleen Cunneen Peppard of Queens, NY, and had two younger sisters, Anne Peppard Sloane (1931-2014), and Kathleen.  At age 17, Tom asked his father to sign his early enlistment application to the US Navy.  He was inducted in April of 1946 and served at St. Albans Naval Hospital in Queens, NY.  After discharge, he attended St. John’s University, where he graduated with a degree in Biology.  On June 6, 1953, Tom married Doris Busch of Woodhaven, NY.  Upon the arrival of their first child in 1957, they moved to Garden City, NY, into the home they have shared and raised family from then until now.  Tom’s first jobs had been with pharmaceutical companies, but feeling a need to serve others, he started a lifelong career in Education.  His first position was as a Biology teacher at Sewanhaka High School in Floral Park, NY, becoming an Assistant Principal after earning a Master’s in Education Administration at St. John’s.  In 1970 he accepted an Administrative position in Nassau BOCES, where he spent the remainder of his career as Principal of two of their vocational schools.

Tom Peppard was exceptionally devoted to his family, taking quiet pride in all their accomplishments.  He was a faithful member of St. Joseph’s RC Church, attending Mass weekly, and teaching CCD.  He was a member of the local William Turner Bradford American Legion Post and ran the local Memorial Day parade for several years.  He had many lifelong friendships, a nascent talent for painting and sculpture, and a MacGyver-like brilliance in his approach to home repair.  He will be remembered for his gentle sense of humor, his endless physical energy, and his love of spending time with his children and grandchildren.  He was greatly loved, and he will be forever missed.

Due to the current pandemic, funeral services will be private, with a memorial service to be held later this year.  Interment at Calverton National Cemetery will likewise be private.  In lieu of flowers, the family asks that when social distancing is ended you give your friends and loved ones a big, long hug.