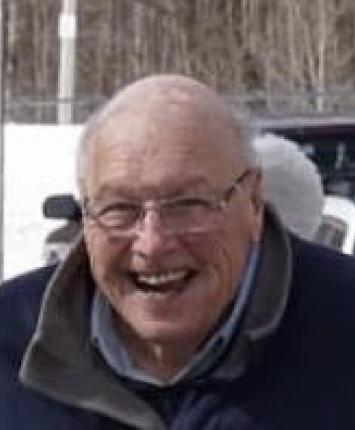 William Martin (Bill) passed away on April 14,2020, at the age of 87. Bill was a lifelong
resident of Garden City. He graduated from Garden City High School and attended the University of
Maryland on a basketball scholarship. He worked for a number of automotive aftermarket companies,
before retiring from Federal Mogul in 1998.

Bill was active in Garden City youth sports, and followed his sons’ through their college sports careers.
He was known to travel far and wide to watch their lacrosse games, and was truly their number one fan.
Bill was an avid NY sports fan, and enjoyed most any sporting event. He especially loved cheering the
Jets though was disappointed often. His sons tried in vain to sway him to be a Patriots fan, but to no
avail.

Bill enjoyed spending time at his vacation homes in Sag Harbor and Lucas Pond, in Northwood, NH.
He frequently visited his two sons’ farms in NH; where he always lent a helping hand. He was incredibly
proud of his sons, and their children.

Bill was married, and a devoted husband for 64 years. While his wife also grew up in Garden City, a
year apart in school, they didn’t actually meet until college, while on a blind date in Washington, DC.
He is survived by his wife, Barbara Seaman Martin, Sons Scott and Glenn, daughter-in-law Jane and
Dianne, grandchildren Ashley, Tyler, Kelsey, Tucker, Bella and Cole. He had 8 great grandchildren.
His love and concern for all, always dashed with a bit of humor, will be truly missed by all who knew
him. There will be no immediate service, a celebration of a wonderful and fulfilled life will be held at a
later time.Bill enjoyed visiting the Morton Wildlife Refuge in Sag Harbor.

If you would like to make a donation in Mr. William Martin's name, you can do so through US Fish and Wildlife Service in Shirley, NY mark for Morton NWR. You can send the donations to 340 Smith Road, Shirley, NY 11967.