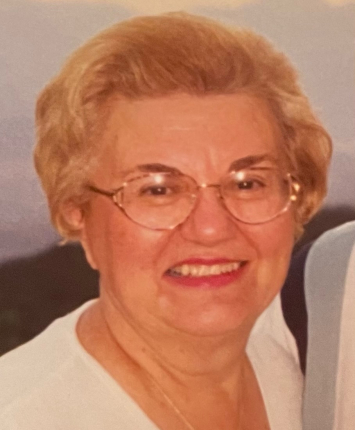 In lieu of flowers, as an expression of sympathy, the family suggests a contribution in Evelyn’s name to the St. Anna’s Ladies Philoptochos at St. Paul’s Cathedral.

The family of Evelyn Mavricos kindly request that masks be work during the visitation and service.

On Sunday, January 8, Evelyn Mavricos, beloved wife, mother and grandmother, passed away peacefully, at the age of 96 surrounded by her loving family.   Evelyn is survived by her husband of 74 years, Mario, her daughter and son-in-law, Dyte and Bruce Garrison of Ossining, NY, her son and daughter-in-law, John and Patrice Mavricos of S. Yarmouth, MA, her grandsons Christopher Mavricos of Boulder, CO and David Mavricos of Cincinnati, OH, and her sister, Helen Gillan of Garden City, NY.

Evelyn was born in Astoria, Queens to Anna and Christos Georginis, graduated from Bryant High School and worked for the Manhattan Bank, becoming Chief Teller and “proving to the penny” every night.   She was admitted to NYU twice but declined to attend, mourning the sudden death of her 12-year-old sister, Katherine, and later when she became engaged to marry Mario.

In 1947, Evelyn met the love of her life, Mario, at Nikou’s Paramount Pine View House, in Swan Lake, NY, where their families vacationed.  After a joyful courtship, they were married the following year at the Greek Cathedral of The Holy Trinity in Manhattan and held their reception for 300 at the Martha Washington Hotel, orchestrated by Evelyn’s father, Christos, who owned the Presto Restaurant in New York’s fur district.

Evelyn and Mario began married life at the Metropolitan Apartments in Astoria, where they had their first child, Aphrodite, followed by their son, John.  They moved to their first home in Whitestone, and later to Garden City, NY.    They had recently moved to Maplewood Assisted Living in W. Yarmouth, Mass. to be near their son.

Evelyn’s family life was filled with love for her family and friends, which she expressed through her gracious entertaining, hosting over 40 family Thanksgivings and many other celebrations.  She was a superb cook and baker and left a legacy of recipes for her family.  Evelyn’s memory for events, people and places was unsurpassed, even to her last week of life.   A skillful and meticulous worker, she excelled at crafts such as quilting, decoupage, embroidery and beading, winning awards in local shows.  An expert seamstress, Evelyn often sat at her sewing machine late into the night creating clothes for her daughter and herself.

Among her happiest memories were the trips to Europe, New England and California with her young children, and later, Greece and Florida with her son, daughter-in-law and grandsons.

In retirement, Evelyn and Mario spent winters at their condo “paradise” in Vero Beach, Florida, enjoying many happy get-togethers, “Movie Nights”, card-playing and dinner parties with their many friends.

The beating heart of the family, Evelyn will be dearly missed by Mario, the rest of her family and her many friends.    Her last day of full consciousness Evelyn asked Mario to make a list of all the people who would be coming to dinner at the house when she returned from the hospital so she could plan a meal to take care of them.

The family of Evelyn Mavricos kindly request that masks be work during the visitation and service.