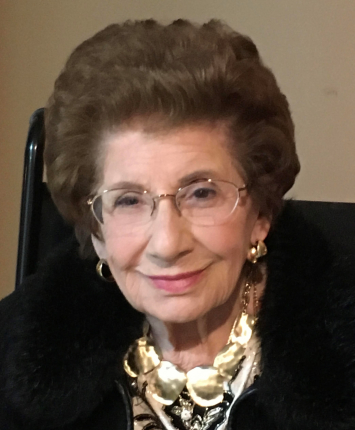 In lieu of flowers donations may be made to the Michael Magro Foundation.

Louise Magro Abitabile passed away peacefully on Saturday, September 11th at the age of 93 years old.

Louise was born and raised in The Bronx, N.Y, the first child of Antonio and Anna Biancardi, and the sister of Dominic, and Anthony who survives her. She earned a BA from Ladycliff College in Highland Falls, NY and after college was a social worker for the New York Foundling Hospital.

She married Salvatore Magro on September 2nd 1951 and together they moved to Garden City in 1953 where they raised their four children.

Louise lived in Garden City for the majority of her life. 68 years. She was a devout parishioner of Saint Joseph’s Roman Catholic Church and an active member of the Community Club of Garden City where she served as Head of the Art Department. But art wasn’t her only passion, she also had a flair for making new friends and an eye for great clothes which led to her job as a Sales Associate at Bloomingdale’s. Louise worked at Bloomingdales for 23 years from its opening until the Franklin Avenue store closing in 1995.

Louise was regarded by her family as a genuine matriarch. She was fondly known as “Command Central” because she not only led the family, but also fostered an environment of love which bound together her family of four children, their partners, ten grandchildren and one great-grandson. She is survived by her four children: Paul Magro (Terrie), Anthony Magro (Laurence), Joanne Seebacher (Robert) and Lisa Combatti (Greg) as well as nine of her ten grandchildren and one great-grandson: Rachel (Thomas McAteer), Lauren (Daniel Hamersma) and Paul Seebacher, Vanessa, Christina and Isabelle Magro, Marc Magro, Kimberly and Daniel Combatti, and her great grandson Hudson Seebacher-McAteer. After Sal’s death in 1978 at age 56, Louise married Peter Abitabile in 1981 and were together for 27 wonderful years until his death in 2008 at age 85.

Louise was universally loved and liked for her charming, witty personality, her vivacious conversational ability as well as her interest and respect for everyone she met.  She was an incredible woman with great strength and resilience.

We will all remember Louise for who she was and for inspiring us to be who we are today.